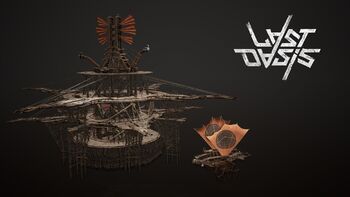 A render of the Trading Station, shown on Twitter

The Trading Station is a hub structure often built in oases. They connect multiple oases together with trade networks and create an economy based on supply and demand.
Trade networks stretch between the known oases. The global player-driven economy is based on real supply and demand. Smart and quick traders can make huge profits, but running trade routes always comes with a risk. Other nomads may opt to produce or hunt down rare and highly localized resources. It’s always wise to consider potential competitors first though. Challenge another clan’s monopoly, and you may become their next target. Every nomad should also note that a Trading Station is not global. Meaning that you wont be able to buy the resources that your local station offers if you decide to move forth into new land.

Trading Stations are also a safe zone. When Trading Stations anchor in place, there is a perimeter of watchtowers placed around the outside of the station. When a player enters the perimeter, they cannot engage in PVP combat, player or walker, for fifteen (15) minutes. The timer is slowly regenerated as you leave the trade station. This zone also acts like edge of map, giving only 20 seconds to transfer to lobby.

A Trading Station in action

The player economy will be a pivotal part of Last Oasis with resources becoming more scarce as players harvest them.

Trading Stations do have NPC offers available on some items at a standard rate to support the price of certain items.

Trading stations collect a 10% tax from the proceeds of every sale on the market.

When the map is controlled by a clan, the tax money collected by the market will go to that clan.

One should keep in mind that if profit margins are slim on a trade, taxation could actually cause the trade to result in a loss for the player.

The trading tables are where all of the business on the Trading Stations are conducted.

There are many available trading tables on each station, with multiple tables per floor.

Buy and Sell orders in Last Oasis work similarly to many other games with some slight differences.

A "Buy order" or a "Sell order" are created at trading stations by players who wish to buy or sell Trade-able items from other players.

Buy orders are placed by a player when the player has a specific price for a specific item in mind. The player creates a Buy order by traveling to a Trading Station and moving to one of the Trading Tables.

The player then clicks on the "Buy order" option on the right-hand side of the trading screen and chooses which item they would like to purchase and what price they want to pay for each item.

Sell orders are placed the same way as Buy orders, but by clicking on the "Sell Order" option instead.

Sell orders are different from buy orders in that instead of the items that a player wishes to buy, they instead select the item that they wish to sell and the price they require other players to pay for their items.

Auctions are often rare boxes of items that different people can bid on. Items must be picked up form the trade station they are bid on from.

You can challenge other players in the center of the trade station to a duel. It's also possible to bet flots of duelers, more info to come soon.