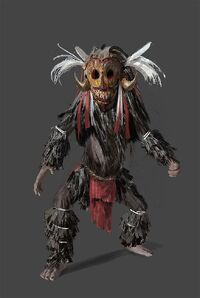 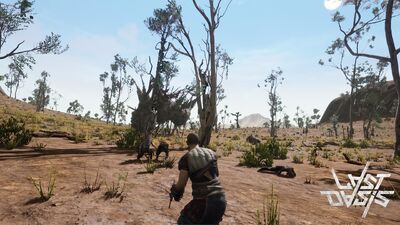 A player fighting some rupus

The Rupus are hostile creatures in Last Oasis.

The Rupus are monkey-like creatures that are hostile to players. There are 7 types of Rupus (White deaths count, despite not having the word 'Rupu' in their name), with a vast range of difficulty. All Rupus are the same in the way they use directional combat, similar to players. They live in small Rupu Camps with 1 or more stilt-style huts (i.e. on stilts), with a wooden fence around them.

There are 8 types of Rupus with varying levels of difficulty, with the easiest killable by new players easily and harder ones, which expert players can use as sparring partners.

Common traits of most Rupu:

Most rupu will use nets to snare small walkers that linger near them, quickly passing them or using a walker larger than a dingy will negate this.

All rupu generally at this stage of the game development have poor pathfinding and will simply run at you in a straight line, sometimes leading to them getting stuck.

All rupu will signal when you are too close to them, swinging there weapon around above there head and roaring/growling at nomads for a few seconds, leaving the area will cause them to become passive. Staying nearby will eventually cause them to run at you and attack. Coming very close to a rupu while it's angered will cause it to become hostile immediately.

The weakest Rupu, with 60 health, is the Rupu Scavenger. This low-level enemy carries a wooden stick which resembles a Wood Shaft, and only does a small amount of damage. This type of Rupu should be very easy to defeat even with minimal combat skills. These Rupu aren't normally found in camps and are only found wandering around the map, typically in the desert or near valley areas.

The second, slightly more challenging Rupu is the Rupu Forerunner. Unlike the Rupu Scavenger, it carries a Beat Stick. This makes it do more damage than its precedents. This type of Rupu should still be fairly easy for a beginner to defeat, but its stats are higher having 65 health as opposed to the 60 that the Rupu Scavengers have. Rupu Forerunners are seen in small to medium sized Rupu camps in pairs or threes along with a harder Rupu Hazraki.

At this level Rupu Hermits start carrying more powerful weapons. They are equipped with an unspecified maul which does more damage than the beat stick the Rupu Forerunners carry. Often seen wandering around alone around valley areas on medium maps. Having around 80 health and a modest speed they are a fairly standard foe, especially since they aren't any better than forerunners at blocking and are always alone.

Unlike most rupu, they have fairly decent loot for there 'level' compared to similar rupu.

Rupus start getting more difficult for beginners at this level, although still quite laughable for more experienced players. Rupu Sentinels carry clubs and come in larger camps in either pairs or threes. They have 100 health although by having clubs, they swing considerably slower than most previous Rupus. However they're much better at blocking than earlier rupu, due to coming in groups they can often be painful to handle alone if you're careless.

Rupu Hazrakis are a sort of 'mini-boss' Rupu. A Rupu that is the 'leader' of the camp and is a moderately difficulty adversary for expert players and something that could make a beginner cry. While being the 'leader', they can also be found wandering around solo. They carry an axe which does a large amound of damage, and coupled with having high health at 180, are a target not to be taken lightly and are very compitent fighters, being fairly skilled at blocking. Rupu Hazrakis have a sort of mane consisting of 3 tentacle-looking strands of hair on either side of their necks.

Rupu Shamans, along with the precedent Rupu Hazraki, are both the 'boss' of their camp. Rupu Shamans are found exclusively in larger camps consisting of 3 or more buildings. They are accompanied by Rupu Sentinels in tight packs of 2 or 3. Rupu Shamans are unlike Rupu Hazrakis both in the way the latter can be found outside, and that Rupu Shamans can be seen in pairs in the largest camps. They carry a large, 2 handed Bonespiked Sword and weilds it with extreme proficiency. Being even more skilled than the Hazrakis, allowing them to take and deal considerable punishment to unprepared nomads. Highly recommended singling them out for the best results.

Despite not having the word 'rupu' in their name, they are still classified as Rupus by their monkey-like appearance and behavior. These frightening Rupus are typically found in valleys or forests, and though they most commonly spawn solo, they can still be found in groups due to close spawn points. Their fast speed and high damage, unbeaten by other Rupus, makes them the toughest Rupu around. Although their health isn't the highest, the damage and speed this monster possesses makes up for it.

White Deaths shouldn't normally be approached on foot unless you have a good grasp on blocking and melee combat as its very easy to miss judge there swings as they often start swinging before you think their in range, leading to a very swift death. They also have one of the longest agro ranges of any rupu meaning you'll often hear these terrifying beasts before you see them or even leading to multiple white deaths coming at you at once. Arguably one of the most dangerous rupu on medium oasis.

The Yellow Rupu is found on the Hard Map and has a large amount of Health, with comparable damage. Feathers and Ceramic can be found after defeating them in addition to common Rupu loot.

All Rupus drop common to rare materials, tools or consumables. They drop every item in the below list with varying degrees of rarity and amounts.